MY ADVENTURE WITH THE ONE YEAR BIBLE

I began writing this post several months ago. I decided to go ahead and publish it, even though I've not quite followed through on my original intent to share insights as I read the Bible using the One Year Bible format which includes a bit of the Old and New Testament, a Psalm, and a Proverb for each day of the year.

I have never previously read the entire Bible, and felt it was high time to do so. Of course, unless one starts, one can't even consider completing it. I really enjoy reading it, however, I'm not exactly staying on top of the daily schedule.

More recently, I've picked up another little book I found at a book sale. Jesus Calling, Enjoying Peace In His Presence ~ 365 Day Devotional, by Sarah Young. I quite enjoy the passages and read these daily.

Lately, there has been a lot of challenges for which I find it all the more essential to lean onto something greater than ourselves. When we attempt with our small mind to figure things out and handle it all ourselves, the outcomes are probably not nearly as spectacular as when we turn it all over to God. 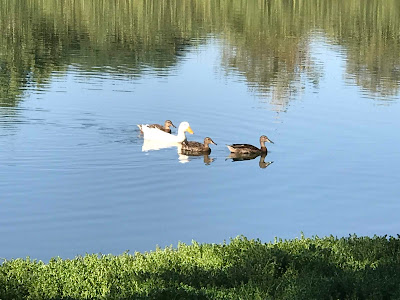 So, as I will be spending time away from my husband while helping my mom, I thought I'd attempt to take time to reignite The Strong Spirit Path blog.

All of my mental, emotional, and spiritual resources, and even my physical health seems to be getting tested right now. I hope that by maintaining some sort of spiritual practice, reading daily or near daily passages will provide peace, no matter what may be going on in my present circumstances.

I am neither an orthodox Christian, nor New Age follower, nor Vedic Yogi, however, I find many parallels among the teachings, and will not dismiss anything out of hand because of some type of conditioning to do so.  I thought I'd use this format to share my personal insights as to how I interpret what I read, regardless of how others have interpreted them.   I was not raised religious, so I am a bit of a blank slate. As I learned from Dr. Hart, founder of the Holistic CORE Counseling system, we each have a unique body of knowledge and body of experiences.   God speaks to each of us knowing full well what we are made of!

This is my personal sharing, and may be viewed as politically or religiously incorrect.  If anyone finds what I write to be offensive, or 'inaccurate' according to their beliefs, so be it. You have your right to disagree just as I have a right to my own perspectives, which may evolve over time.  I am certainly happy for meaningful discourse on this topic as it is quite fascinating to me!

I have always been an open minded person willing to see multiple sides.  I find our current cultural stifling of honest discourse sad, and paralyzing.  I hope that by my taking the risk to share such personal information, and potentially controversial topics ~ without self-censoring out of fear of how it will be received ~  will be of value to others.  Maybe we need an updated way to view God that is free from man-imposed dogmas issued as a means of control, so that we can become more Self-Realized ~ personally and collectively.

Having an "it's this way or the highway" attitude is immature at best.  If I find that my sharing isn't worth it, I'll simply stop.

Ideally, it will be cathartic, or perhaps even helpful to others out there looking for alternative, out of the box points of view, and a compass for which to orient their lives.

That out of the way, the remainder of this post was what I has previously written.  I'm keeping it as an intro to what I am wanting to share in this blog.  Enjoy!

Oh, the joys of those who do not follow the advice of the wicked, or stand around with sinners, or join in with mockers.

But they delight in the law of the Lord,* meditating on it day and night.

They are like trees planted along the riverbank, bearing fruit each season.
Their leaves never wither, and they prosper in all they do.

But not the wicked!
They are worthless chaff, scattered by the wind.

They will be condemned at the time of judgement.
Sinners will have no place among the godly.

The above Psalm was included in the January 1 or Day 1 reading of The One Year Bible.

There are those who swear by the Bible being the Living Word of God, and those who question the legitimacy of those who wrote it.  There is no doubt that he original languages, and the accepted axioms and definitions of terms that were used centuries ago have had to be translated for contemporary readers of other languages.

I'm not at all a Bible scholar, as this is my first time reading it.  However, I have to guess that the subject of the validity of the writings and the various translations has no doubt been questioned by various groups through the previous centuries.

It is often the case that a word or phrase in one language will not translate well into another, at least as understood by those speaking that particular language.

As a first post, I wanted to share a few of the ways translations were made in The One Year Bible.  The first beginning with the way in which Lord is spelled, as asterisked above.

Lord here should be in small caps, referring to a particular translation of the YHWH tetragrammaton.   I don't have the option on this blog to create the small caps as translated.

Here are more 'Rendering of Divine Names' p. A17:

El, elohim, eloah = 'God'  ~ Except where the context demands the translation God(s) (As in plural.  As in more than one God!)

'adonai' => Lord (as it is written, without the small caps.)  'Adonai + YHWH' = 'Sovereign Lord'
YHWH + elohim => Lord (small caps) God
YHWH + tseba'oth => Lord of Heaven's Armies
YAHWEH => "when the personal character of the name is being invoked in contrast to another divine name or the name of some other god (for example, see Exod 3:15;6:2-3)"

What I find interesting is that 'other gods' are referenced, yet translations will render that hard to discern.

While Hebrews or Jews are credited with being the first to worship only one God, there are records that indicate otherwise. In fact, there are those who have linked the scriptures in the Bible, and even the language used to an ancient Aryan civilization that lived in Ireland, for which Gaelic language is quite similar to the Aramaic.  As that is a huge topic in itself, and something I had come across in the past, I'll table it for now as I would have to dig up sources, if still available.

That's it for now! However, I've included a few books below.  I've been reading books by J. Philip Newell about Celtic Christianity, which I've enjoyed, along with the two books mentioned above, for any who would care to join me!