Recap of Our Epic Cross-Country Move & What Has Transpired Since (Lots of Pics Too!)

"I am the vine, ye are the branches; He that abideth in me, and I in him, the same bringeth forth much fruit: for without me, ye can do nothing." ~John 15:5

On August 25, 2017, I published Self-Sufficiency, Freedom & Our Big Dreams to Find Our 'Peace' of Land ~ the first post in a series about relocating, ideally on a piece of land in an area near more lakes, forests, and four-season climate.  In February, 2018, I wrote a follow up, sharing a bit more about our desire to not only move, but to also transition away from acupuncture, and a brick and mortar business.  Our preference being to motivate people to become stronger and healthier through safe physical training, and a High Vitality Diet, and therefore help prevent premature physical and cognitive decline rather than treat symptoms after they've progressed.

At the end of March, 2018, clarity emerged as we decided to move back near family.  Two years later, we finally moved.  Much has transpired since!  It's high time I wrote a follow-up!

We actually headed out of AZ just as the Covid19 restrictions were being implemented. As a result, we were easily able to sell some items, like desks and training equipment within hours of posting them on Offer Up. 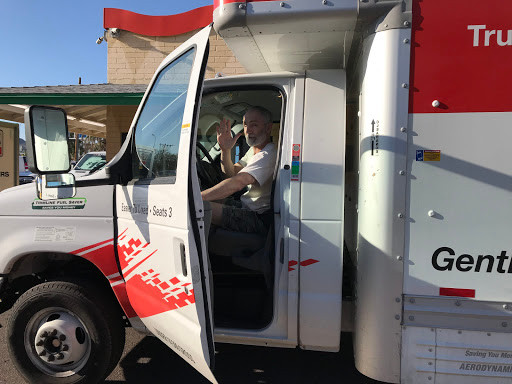 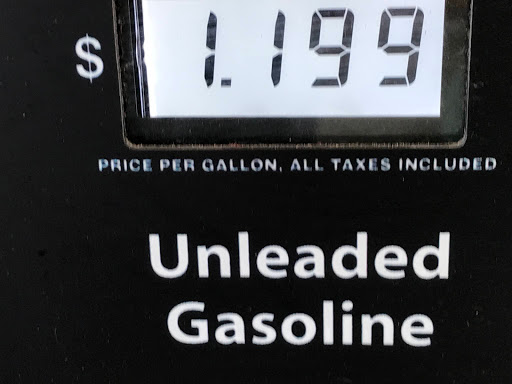 Prior to moving, it was allergy season in AZ.  Dust and cardboard boxes always stir up histamine reactions   for me, made worse with the spring bloom.  On March 31, 2020, after several long days of packing, loading the truck, and cleaning, I was really suffering!

We slept on the floor our last couple nights.  My lungs felt like they were scorching, and my breathing was very labored.  Somehow we managed to get it all done and head out April 1.  We drove across Highway 40, through the eery ghost towns in Texas and New Mexico.

Once we arrived in Oklahoma, we about kissed the ground.  The climate was moister, the grass was greener, and all our respiratory issues nearly vanished.  According to Chinese medicine, the lungs prefer moist climates.  I'll attest to that!  My lungs were so dry they felt like they were on fire! 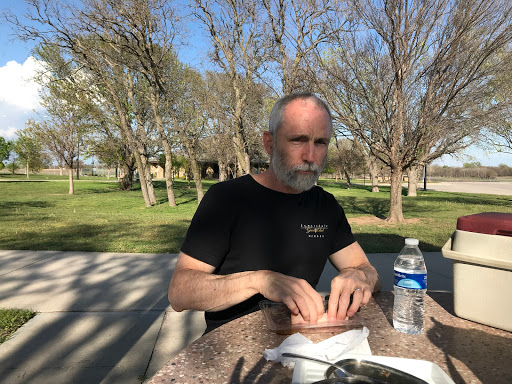 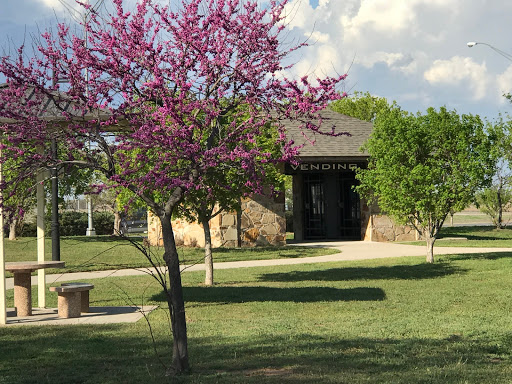 There's nothing like an epic, cross-country road trip!  I enjoy the scenery, and smaller towns of rural America.  It was a magical few days on the road with a few interesting and unplanned adventures. 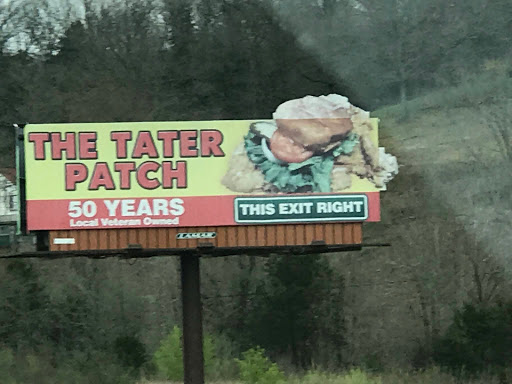 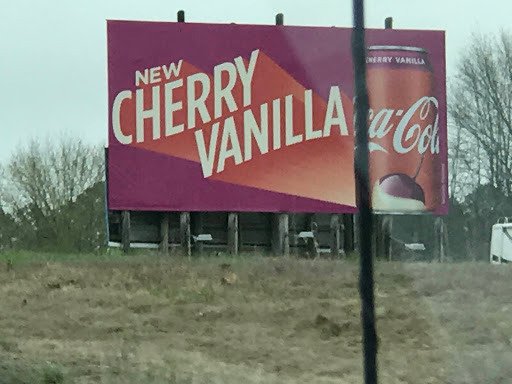 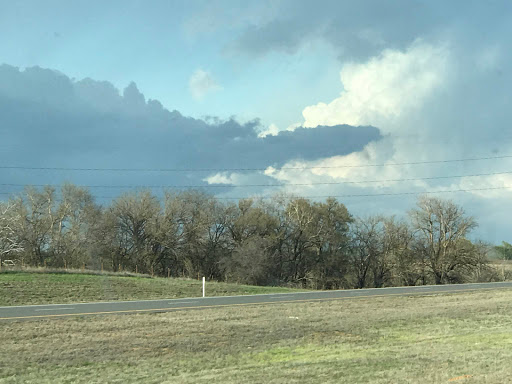 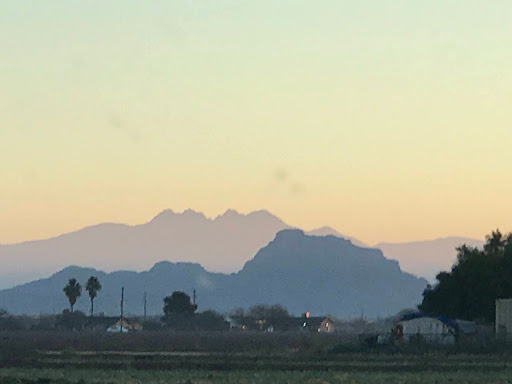 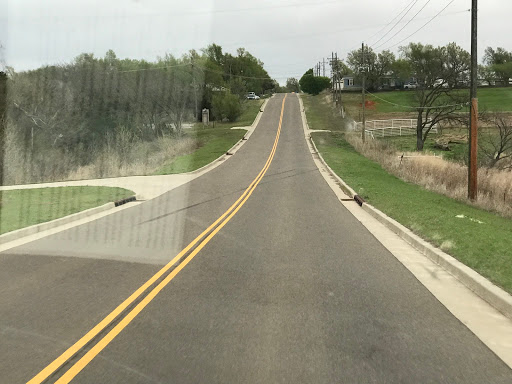 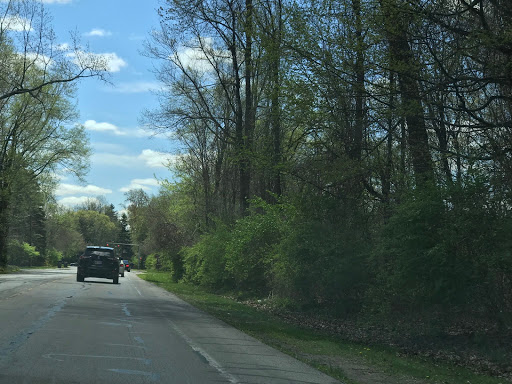 You can watch the video below to catch a glimpse of our journey if interested.  As an interesting side note, it was weird to see parking lots of Walmart & Cost Club jammed packed, while small, local businesses were all closed.

Before leaving, we had found a manufactured home that looked perfect for us.  We applied to purchase, but was turned down.  Given that millions of Americans were suddenly unemployed due to Covid19 closures, and our history of being self-employed, with no employment track record in our new home state ~ getting approved for a mortgage, especially for a manufactured home was looking next to impossible!

Once we arrived, we looked around for a rental.  They were pretty disappointing.  We just left a big apartment compound, and were very tired of having neighbors that smoked or partied late.

We tried to reapply with another company, and were accepted, but at an astronomical interest rate.  We visited the home we were interested in, and it just felt right, but GOD seemed to have other plans for us.  Or, did He?

Apparently it was meant for us to have!  We are now living in our new home and really loving it!  (Well, except for the many trains honking as they pass during the 2-5:00 am time period!) 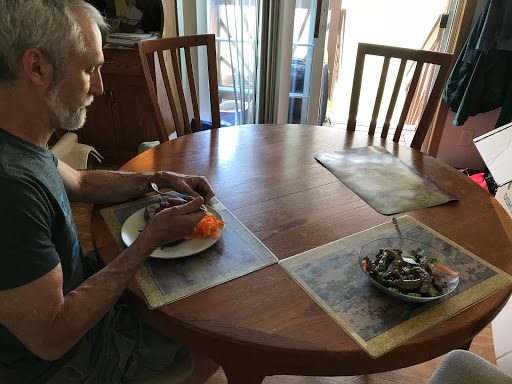 One thing that has changed has been an ongoing transition as a seeker of truth.  I was raised atheist, yet searched for something, anything that could provide insights or strategies towards helping me heal and harmonize my own life.

I yearned to be part of a greater familial/ancestral and/or spiritual 'tribe' of like-hearted souls.  I often felt sad, without always knowing why, and like I had a void that could not be filled.  It had eased up quite a bit since meeting my Prince, yet never fully resolved.

As I've previously written, my search began in earnest after college, while still in my early 20s.  I went straight to the self-help and New Age/metaphysics sections at book stores, devouring whatever caught my eyes.  I read about shamanism, Taoism, and Cherokee healing;  and others.  Taoism made the most sense to me, centered around finding harmony when in alignment with Nature, and Natural Laws.  I was, however,  becoming ever more dubious about many New Age teachings over the last several years.

In previous posts, such as this one,  I was still using New Age-y terms, like the Universe, or Great Creator rather than GOD, as I was still unwinding from decades of accumulated beliefs and prejudices against organized religion and Christianity in particular.

That all began to change in the spring of 2019.  I wrote in My Awakening and Divine Healing about being overcome  with a very strong urge to repent, and know God.  I share details in the video, below.

I was raised in secular, atheistic environments.  Science was more highly valued.  But something in me felt a strong need to understand, no, to really KNOW GOD as a true Father, through some sort of direct experience.

Arguments for and against Christianity, and the validity of Jesus as a Son of God, and Bible scripture were coming to a head in my mind.  I wasn't sold on science, nor organized religion, yet I no longer resonated with New Age teachings either.

I knew that there was more to life than what we could see, hear, or touch, unlike many science-oriented materialists.  I instinctually began to doubt the evolution theory as well, and have come to find out that even Darwin didn't believe in it.  Here is an interesting 5-part series on YouTube by David C. Pack of the Restored Church of God for anyone interested.

With nothing remaining to do, I prayed, journaled, and poured my heart out onto paper as I repented; I acknowledged that I was carrying around a load of regrets, and prayed for release and resolution.  You can watch the video above, or read the post linked here and above to find out what happened next.

Suffice it to say, by the end of the weekend, I was giddy with a lightness I had not experienced in a long time.  Some time later, while with Don praying at the fountains near where we were married, I had another shift.  I don't know how to describe it, other than I was completely filled with a sense of being a daughter of GOD.  It felt personal.  It was truly unbelievable.  My heart was overflowing with JOY!

Over the holidays, after being inspired while listening to Jesse Lee Peterson, I forgave my mother.  Don likewise forgave his parents.  You can read his excellent article about Forgiveness, here. It was divine timing that we were able to meet Peterson, and his assistant Nick in AZ right before we moved.  We all enjoyed a fun lunch together. 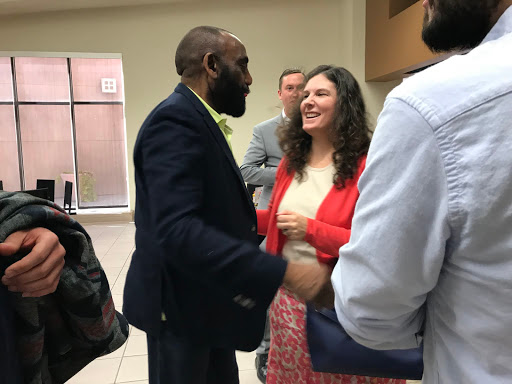 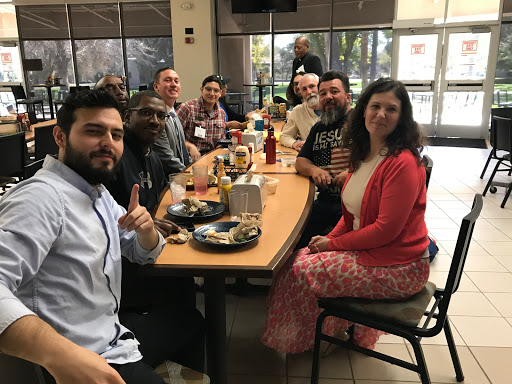 Peterson encourages people to go and forgive their parents to return to the order of GOD.  We forgive by first acknowledging that it is wrong to hold resentment towards others, then forgiving.  After we take this big first step, GOD forgives us.  That is when the real magic begins.  The veils drop, and everything begins to change.  Read my entire Forgiveness Series here.

Of course we have to watch out for Satan's antics, and practice listening for GOD's voiceless voice to reveal to us His wisdom, while observing, rather than participating in our thoughts ~ the voices in our head.  Call it the ego, or monkey mind if you will.  I now refer to it as Satan's Operating System, or SOS.  I will be writing more about learning to trust your Divine Operating System (DOS) versus SOS in my upcoming book, The Golden Compass.

As a result of repenting and forgiving, everything has fallen into place magically, seemingly without effort!

"But seek first the Kingdom of God, and His righteousness, and all else will be added unto you." ~Matthew 6:33

Nearly everything we asked for has materialized: 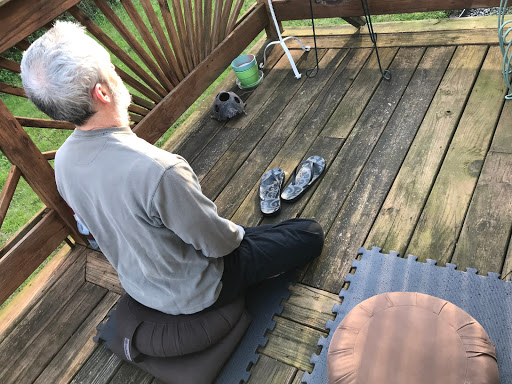 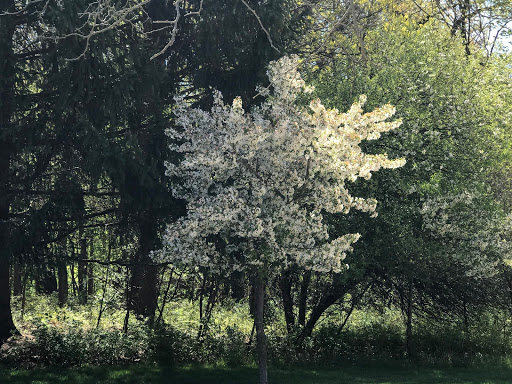 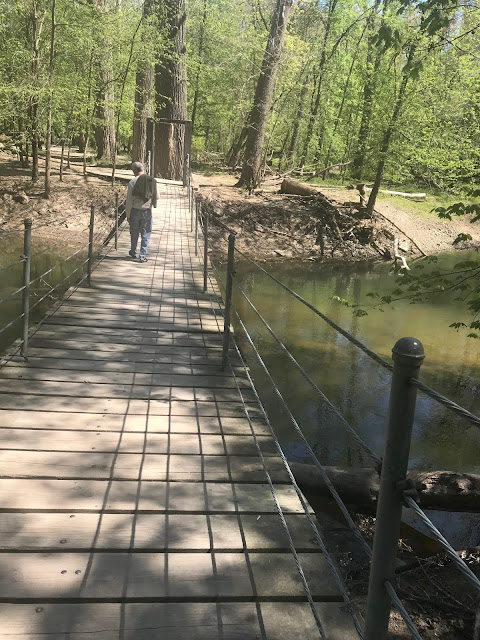 We feel like we've come 'home' and feel immensely blessed!  We don't even feel we deserve any of the endless blessing we are receiving.
Anything we may have needed  fell into our laps.  We really could never have planned this any better!  We are perpetually in awe of how everything came together!  Thank You GOD!

Since moving, Don's mom has passed.  We miss her presence, yet are so grateful we were already here!

We moved my mom out of Chicago.  After all the prep work while visiting her over the last few years, her condo sold within 24 hours of listing, for nearly full price.  We packed her up, and headed to Ohio the very evening before the riots broke out downtown.

En route, we were blessed by two double rainbows.  One right near the St. Joseph river in Indiana was like driving through a giant rainbow arch. 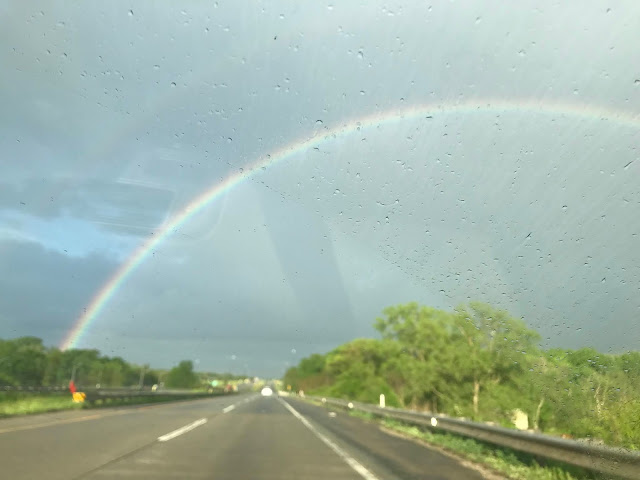 We received two gold $1 coins at a toll booth, when only one dollar in change was due back.  We passed two trucks that had the word 'covenant' written on the side.  And we saw two cute kittens, one that looked like Jasper playing at our final rest stop in Ohio. 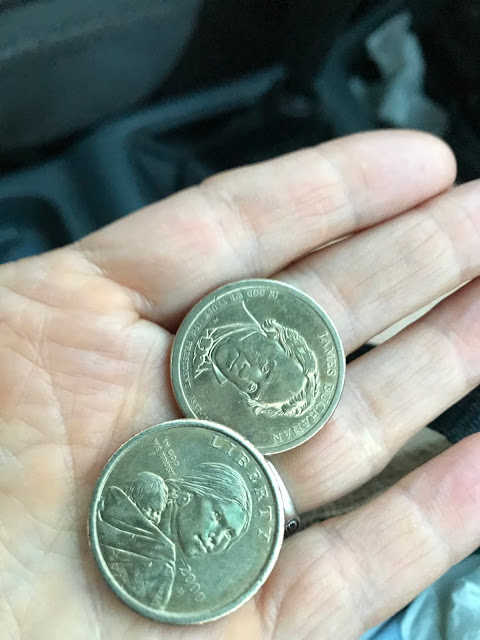 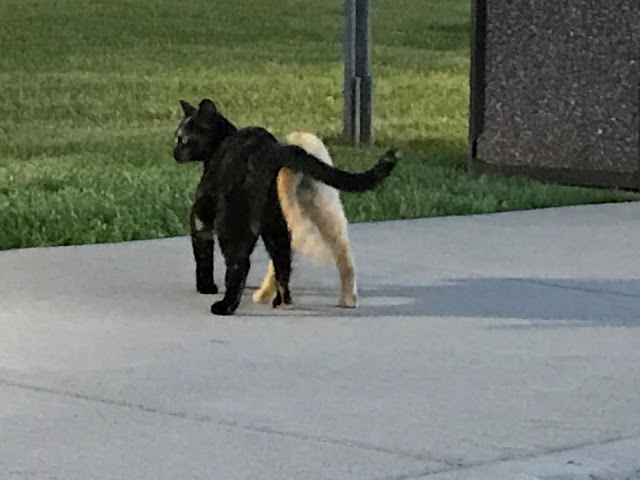 Since being at our new home, we have been blessed by yet another vivd rainbow! 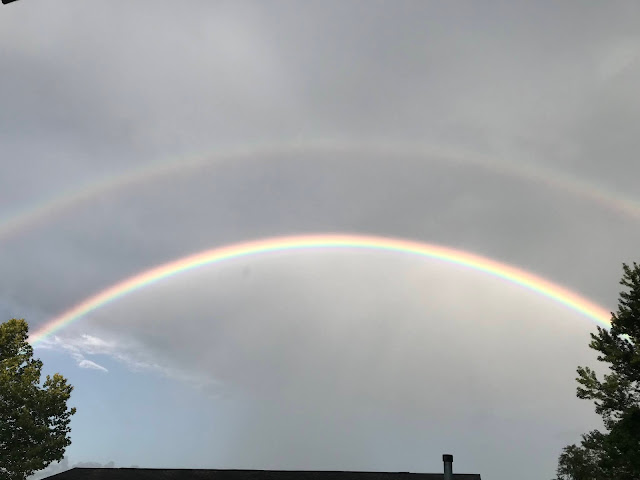 Jasper is happy in her new home as well! 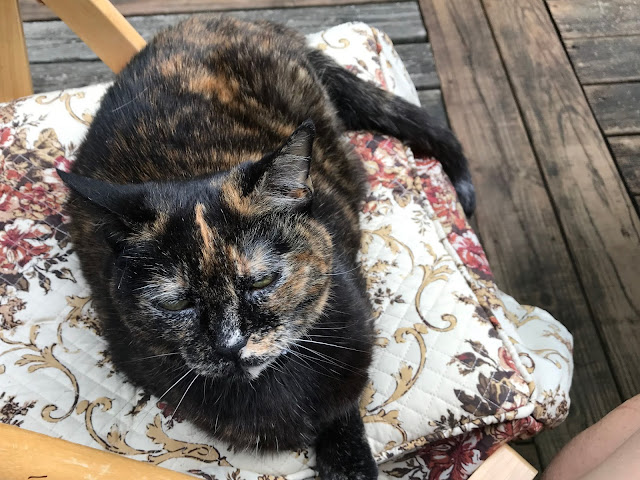 Don and I have great new daily routines, including daily prayer and silent meditation to listen to GOD, plus daily Bible study.  Once you have the keys to reading the Bible, it is AMAZING what can be learned!  We can hardly put it down!

It is a road map for living a healthy, fruitful, righteous life, bar none! 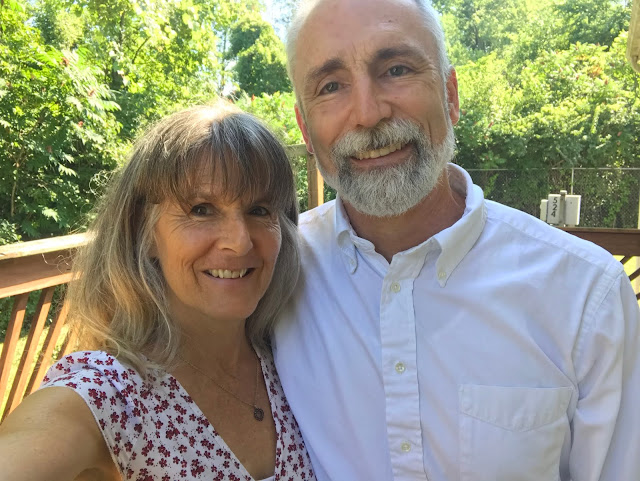 On Thursday, August 20, 2020, we are heading north for an exciting, personally momentous event.  Stay tuned as I share this, and for more about how we are renewing our minds and hearts, and what we  are learning in the Bible upcoming posts!