Why I Got Baptized

"Jesus answered, I am the way and the truth and the life.  No one comes to the Father except through me." ~John 14:6

"For we are His workmanship, created in Christ Jesus for good works, which God prepared beforehand, so that we would walk in them." ~Ephesians 2:10 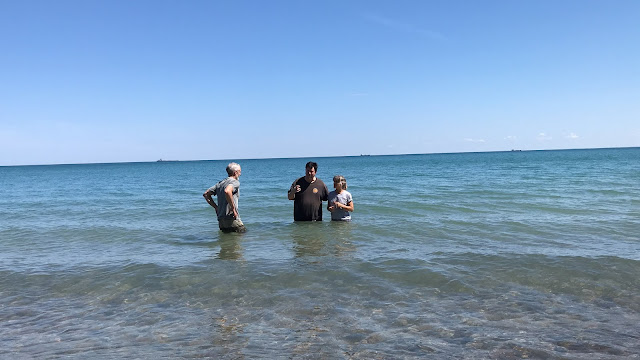 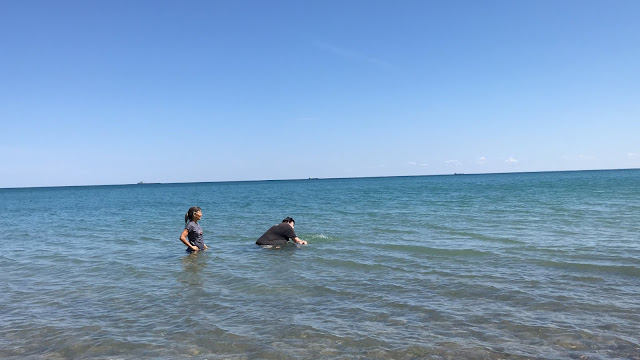 On the 20th day of August, 2020, I was asked to share why I was there, standing on the shore of Lake Huron, about to walk into the clear, calm water to be baptized.  I certainly had reasons.

In the previous post, I shared a bit of my story about how much I searched my entire life for answers and healing.  How I was raised in a secular environment with minimal connection to extended family, and longed for connection to something greater, rooted in a sense of ancestral identity.  I also share my  burning need to know God directly, and to repent, and how I'd been disillusioned by the 'New Age' teachings I had long followed in absence of having a better understanding about Christianity and what is taught in the Bible.

I also shared pictures from our epic cross-county relocation, and how much of what we have desired has now come to pass, as we move closer to our bigger dreams to own a piece of land.  It's amazing how life changes when you seek first the kingdom of God!

While standing there on the beach, I could have taken up everyone's time and gone on about the many mixed messages I received throughout my life.  My confusion as many people, including early childhood friends believed in God and went to church, but in our household, things were different. My father, with English ancestry, wanted someone to explain something to him that would help him  believe in God, and the teachings of the Bible, but of course, he passed away with that desire unfulfilled.  Nonetheless, he would never use the Lord's name in vein.  "Well Judas Priest" he would exclaim when frustrated.   Being the rebel, when he called me out for cursing, I would snap back, "but you said there is no God, so how can I be using His name in vein?"

I could also share, if I were to be totally transparent, that my mom was a bit disdainful of religion.  I learned why.  My mom didn't say much about her upbringing until I was a little older.  When I first heard her stories, of losing her parents during WW2, I was both captivated and shocked.  Then I felt angry.  I never got to meet my maternal grandparents.  They were marched off to their death because they were 'Jewish?'  I couldn't wrap my head around it.  My still young mind couldn't grasp how an entire group of people could be 'persecuted' and legions of people didn't fight back and resist certain death.  Certainly their numbers out ranked their captors.

While 'in hiding' she attended the local village church.  The priest decided that he would separate all the children, eventually seeing them one on one.  Then he had my mom sit on his lap, and began to undo the top buttons of her shirt, to "show her how to make the sign of the cross."  That was the last time she saw him.  She begged her caregiver to not have to return, who readily agreed.  Shortly after, another more developed girl was raped.  The shame it brought upon the family caused them to move away from the small rural village.  The priest was arrested, but not sure what happened to him from there.  My mom had no desire to go back to church from that point on, understandably.

These stories caused me to follow my mom's lead, and 'remain hidden' to my 'true identity.'  As an adult, I became interested in tracing more of my ancestry, and found obituary records online about my grandfather.  They didn't match up to the story I heard about how he passed.  He was picked up early in the war by the Gestapo, and taken away in a big black limo.  It was believed he was immediately assassinated, having worked with the French underground.  They were living in Belgium.  However, the records indicated something different.  Although that's not part of this story here, it did cause me much pause, and sent me down some seriously deep rabbit holes though!

I began to wonder what it meant to be Jewish?  I had many Jewish friends, but I didn't celebrate their holidays, nor did I see myself as one of them.  I didn't see myself as Jewish.  I was devoid of a religion, and only saw myself as being a first generation American, on my mom's side.  I otherwise had European roots.  Even when I worked for Jews, they certainly didn't see me as one of them!  I wondered, why is somebody a 'full Jew' based on matrimonial lineage, versus patrimonial which is more common?  And, is  being Jewish referring to a religion, or a nationality?  If they are a nationality, then where are they from?  My grandparents, and great grandparents were from Poland.  How much further back, I am not sure.  So, did that make me part Polish?

I often felt that I, too, was orphaned and in hiding, just as my mom had been but in an entirely different context.

While I never would have bothered to share all this while standing on the beach, answering the question, "Why do you want to be baptized?" to the family sitting on the sand, watching in support, it certainly provides the background information for my lifelong quest to make sense of my life.

The fact is, these are just stories.  The real answer lies between the lines.  It's the void that could never be filled, until now.

After a lifetime of yearning to belong to a tribe of origin or kindred spirits, where I could feel safe, accepted for who I was, and protected from the insanity of the world at large,  I was overcome with a need to repent, read the Bible, and know God ~ directly.  That was the spring of 2019.

Since that time, which I wrote about in the article linked above, I knew I wanted to be baptized.  And that is the real answer to the question, 'why do I want to be baptized?'  I just KNEW!  It was an urge that came upon me like a flood, just as the NEED to repent did.  I spent many years having negative thoughts about Christianity and organized religion, so trust me when I say, I never saw this coming!

To be clear, I did believe in something greater than myself for many years.  My terminology reflected the New Age speak.  I rarely used the term God.  It was always 'the Universe' or 'Great Creator.'  That said, in more recent years, I began to feel a pull to Jesus.  A strong affinity.  I sensed His Love.  But the doubts in my head lingered.  A voice within me would question if He really existed.  The stories in the Bible seemed like mythology.  I lacked the tools to understand it's content.  Or, rather, I lacked the sincerity in my heart to really understand it, until this past year.

My prayers to know Jesus and the Heavenly Father directly, as HE would have me know was answered.

Since all this transpired, the gift of the holy Spirit enlivened my being, and burned away the residue of a lifetime of confusion, remorse, shame, and sadness.  The transformation was palpable, and immediate.  Through all my years of studying and practicing healing arts, and applying the 'Laws of Attraction' taught in New Age circles, nothing ever came close to what I experienced during my divine healing and awakening.  Things really began to change after forgiving my mom as well.

Nearly one and a half years later, I finally found the right Pastor and location to be baptized, back 'home' in the Midwestern Great Lakes. 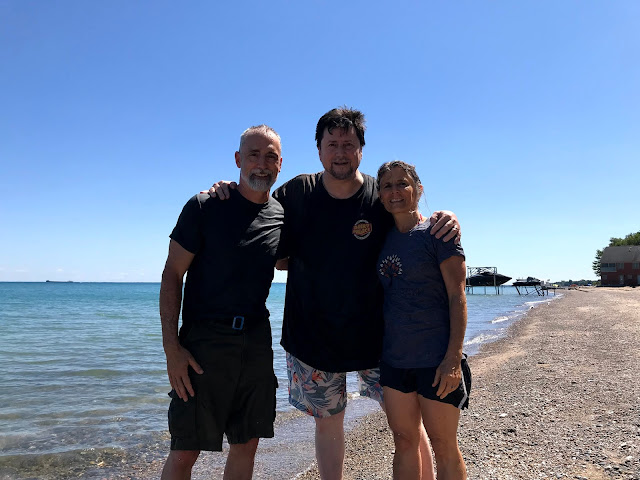 I have learned so much over the last year.  Our life has been so utterly transformed, I am in awe.  God has bestowed blessing after blessing upon us.  My yearning and aching to know the truth, and learn first hand paid off.  I now feel rooted to the past, and understand the Bible to be an amazing love story between God and His bride, the tribes of Israel.  It is also a genealogy, and a roadmap to living a fruitful life, bar none.

"also we have obtained an inheritance, having been predestined according to His purpose who works all things after the counsel of His will." ~ Ephesians 1:11

All our roots are now tangled, but the stories of Noah, Abraham, Jacob-Israel and Joseph have come alive, as if reading tales about my own great great great ancestors.  And, I am!

It's because of a promise made to them that I can hear the voiceless voice of God, for which I am forever indebted.  If only my father were still here, and I could share with him what I've learned.  That he is of the tribe of Ephraim and Manesah, sons of Joseph, son of Jacob-Israel, son of Abraham for whom the original covenant was made.  Plenty of migration records validate this too, which is incredibly exciting to learn.  I am grateful for my father's lineage, and believe this is why I heard the voiceless voice.

"Verily, verily, I say unto you, He that entereth not by the door into the sheepfold, but climbeth up some other way, the same is a thief and a robber.  But he that entereth in by the door is the shepherd of the sheep.  To him the porter openeth; and the sheep hear his voice: and he calleth his own sheep by name, and leadeth them out.

"Then said Jesus unto them again, Verily verily, I say unto you, I am the door of the sheep.  All that ever came before me are thieves and robbers: but the sheep did not hear them.  I am the door: by me if any man enter in, he shall be saved, and shall go in and out and find pasture." ~John 10:1-9

I am so grateful to Pastor Kembel and his beautiful family (including Art) for facilitating and participating in this momentous occasion in my life, and for sharing it with my husband Don, who although baptized when young, never had a full immersion baptism.

I give my allegiance to serve Jesus Christ, Lord of Lords, and King of Kings, and look forward to His Kingdom to come, here on Earth.  I don't know how to explain my love for this person ~ both Son of man, and Son of God ~  who endured extreme torture for all of us to be saved.  I once thought the entire story to be so unbelievable, I couldn't get it.  Now, I do.  It is the most amazing love story of all time.  I owe all I am, and all I have to Him!  The peace, love, and sense of power and shielding has completely transformed my life.  In God, all things are possible.  The real light will triumph over the darkness, at which time all who endure, and have overcome will celebrate with unbridled joy.  Amen!

"And we know that God causes all things to work together for good to those who love God, to those who are called according to His purpose." ~ Romans 8:28

For those interested in discovering biblical and archeological evidence of the tribes of Israel, here is one source to get started.  There are others.  http://christianisrael.org/index.php  Israel is the name God gave to Jacob, son of Isaac (Isaac's sons aka Saxons), son of Abraham.